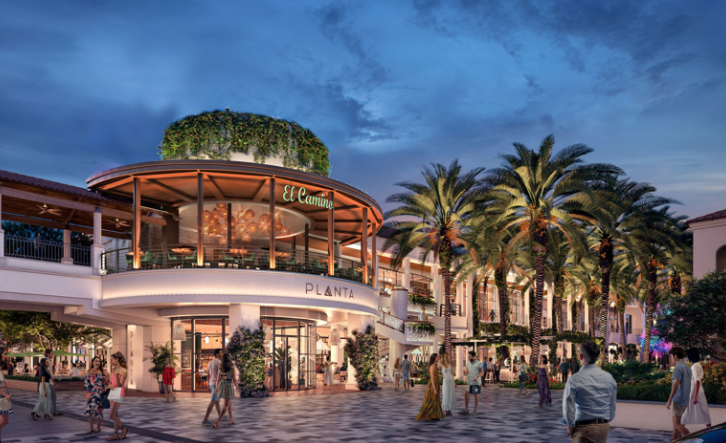 After their West Palm debut at The Square plaza, El Camino’s partners will turn their focus to Boca Raton, where they plan to open their fourth branded restaurant.

If you’re one of the many die-hard fans of the popular El Camino taquería and bar in Delray Beach, wait till you see the restaurant’s outpost in West Palm Beach. It’s more than four times the size of the 2,000-square-foot Delray location.

When it opens at The Square this summer, El Camino will take up 8,500 square feet of combined indoor and outdoor space on the second floor of the plaza formerly known as Rosemary Square. The prime, second-floor corner space – most recently home to Brother Jimmy’s barbecue restaurant – will boast two bars, one inside and one on the rounded terrace that overlooks the plaza.

“The difference is size. This is the biggest so far,” says El Camino co-founder Brian Albe of the upcoming West Palm Beach location, which he and his partners plan to open by the end of June or early July.

Bringing the place to life has been a massive undertaking, Albe says.

“We gutted it down to the studs. We’re through the major construction part now and we have a graffiti artist we’ve been working with in there now,” he says, referring to the South Florida muralist Ruben Ubiera.

This will be the second El Camino outpost to debut since Albe and his two partners opened the original Delray taquería in 2014. The trio opened an El Camino restaurant in eastern Fort Lauderdale in 2018.

Albe and partners Brandon Belluscio and Anthony Pizzo go way back to their early restaurant-life days in Boca Raton, where they all worked at Pranzo, a former Mizner Park hot spot.

Together, incorporated as the Modern Restaurant Group, they opened the acclaimed Cut 432 steakhouse on Delray’s Atlantic Avenue restaurant row in 2008.

In 2011, they debuted Park Tavern, also on Atlantic Ave. That was three years before they opened the first El Camino in eclectic Pineapple Grove.

They built the El Camino brand on quality Mexican soul food and an extensive tequila-and-mezcal menu to go with it. Now, Albe says that brand will expand its offerings with the West Palm Beach debut.

That means weekend brunch will be served at El Camino at The Square, a first for the tacos-and-tequila brand.

“We’ve been wanting to do brunch for quite some time. The vibe of West Palm Beach is perfect and seems to call for it,” says Albe.

The group’s foray into West Palm Beach has been in the works since the start of the pandemic in 2020. Their new venture will open at a time when expansion plans spread throughout the downtown area and when restaurants with New York roots are setting their sights on West Palm’s new money.

“We’re super excited that downtown West Palm is growing so quickly,” says Albe. “We see this as a good opportunity for us to grow. It’s the natural next step for us.”

In terms of menu, Albe says El Camino fans can expect some added dishes. “We’re going to have a little bit more of a coastal influence up there, some inspiration from the Yucatan Peninsula,” says Albe of the West Palm Beach menu. The new restaurant’s menu also will offer a rotisserie section that would change daily, he says. “It could be al pastor one day and something else the next day,” he says.

The core of the food and drink menus will stay true to El Camino’s elevated street food flavors. That translates to dishes such as ancho-glazed pork belly tacos with pineapple slaw and spiced peanut crunch, octopus a la plancha with salsa pipian and charred cauliflower, tamales studded with braised pork and drizzled with crema and farm-veggie fajitas with all the fixings. For dessert, there’s coconut tres leches and Nutella flan.

Plus there’s an extensive variety of boozy drinks, from craft beers to more than a dozen margaritas to specialty cocktails and featured sipping tequilas and mezcals.

As it is at its other locations, the West Palm Beach menus are reinforced by El Camino’s scratch kitchen.

“We do daily juicing of limes, watermelons, lemons, oranges. Everything is made fresh daily,” says Albe. “The success of El Camino is that we exceed the expectations.”

After they open the West Palm Beach outpost, Albe and his partners will turn their focus to Boca Raton, where they plan to debut another, even larger El Camino by the end of 2023. That one will take over a combined 9,500 square feet of indoor and outdoor restaurant space.

“We have roots in Boca,” says Albe of his and his partners’ Pranzo days. “We wanted to bring it back home to where it all started.”

Sorry, the comment form is closed at this time.